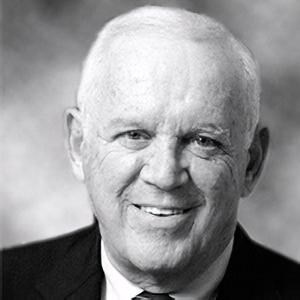 The late Senator Warren B. Rudman became a partner in the international law firm of Paul, Weiss, Rifkind, Wharton & Garrison after serving two terms as a U.S. senator from New Hampshire.

During his 12 years in the Senate, Sen. Rudman served as chairman of the Ethics Committee and as a member of the committees on Appropriations, Intelligence, Governmental Affairs and Permanent Subcommittee on Investigations. He co-authored the Gramm-Rudman-Hollings deficit reduction act. In January 2001, President Clinton awarded him the Presidential Citizens Medal, recognizing his years of devoted public service. He was a member of the blue ribbon commission of The Conference Board called The Commission on Public Trust and Private Enterprise.

Sen. Rudman began his career practicing law in his hometown of Nashua, N.H. He was later appointed attorney general of New Hampshire and then elected president of the National Association of Attorneys General. After completing his public service, Sen. Rudman joined the Manchester, N.H.-based law firm of Sheehan, Phinney, Bass and Green. Sen. Rudman received a BS from Syracuse University and an LLB from Boston College Law School.